Skip to content
For the second time in a week, a certified medical professional has asked me about anger, seemingly out of thin air.
Last week, my therapist asked me how my anger was. We’d been
talking about other things, and she asked it without anything that felt to me
like a segue. I laughed, Well, if you want to talk about my dad, then I’m sure
we could talk about anger. And then we didn’t.
Today, at my chiropractor visit, he said to me, Tell me
about anger. He’d been poking and prodding various things, checking and making
adjustments, talking about nothing emotional whatsoever. I replied, well,
there’s stuff up with my dad not showing up during this time. My doctor said he asked because “it is showing up.”
Even though emotionally, I’m not conscious of feeling it, my
body is.
Like a good girl, I replied to my dad’s text from the other
day with a short email update about my treatment. Very short. Very, what I
would interpret as, curt. His text message said that he and his fiancé were so
busy with their move to Florida, they’d been up past midnight unpacking. His voicemail
to me last week, a call that once again came after dark, after a time I’ve
told him I would be unavailable, reported that his whole weekend was a hellish moving process.
I listened to this voicemail … while I sat in a hospital room
receiving cancer treatment.
I’m just so sorry
that your move to your retirement house in Florida isn’t going according to
your plan. It really must be so fucking hard to have boxes to unpack. Asshole. Insensitive. Inert. Asshole.
So, yes. I’m angry. I’ve been “doing my best.” Trying to
“let go of it,” to “work through it,” to remind myself that it’s not about me
or a reflection of my self worth. And finally, today, after this question from my
doctor, I had it.
This evening, I was listening to a book on tape my friend
gave me by Dr. Bernie Siegel, Love, Medicine, and Miracles. In it, he speaks mainly about cancer patients. What
links them, what qualities they have in common, and what events or
circumstances typically precedes cancer.
I was listening to this tape as I was finally gluing together my teal project.
For many weeks during the summer, I began cutting out chunks
of teal from magazines. All shades of Mediterranean and Bahaman. I had a
project concept to collage them all together, not sure on or of what, but
together, a wall of teal.
Eventually, absent of inspiration of where or how to glue
them, I put all these snips and scrolls of teal in a drawer.
Today, I took them out. I dug in my closet, looking for
perhaps a wooden board to glue them on, and instead found this large
rectangular picture frame I’d found on the street a year ago. I popped the Ikea format out of it, and began to
collage on the frame’s inner matting (see photo, it’s hard to explain, and I
assure you, the teal comes out better in real life). 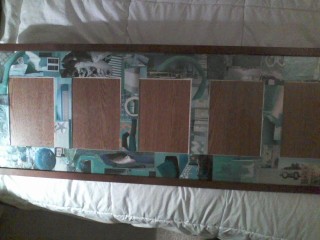 The point is, I was engaged in finally doing something that
I’d wanted to do for a very long time.
The point is, I heard Bernie Siegel say, “If a person deals
with anger or resentment when they first appear, then illness need not occur.
When we don’t deal with our emotional needs, we set ourselves up for physical
illness.”
I paused the tape and rewound. I wrote the rest down:
“Depression is a partial surrender to death and it seems that cancer is despair
experienced at the cellular level.”
Fuck. That.
I went to my email, and brought back up the draft I’d
composed to my dad when we got into our fight on the phone almost a month ago
(the “conversation” when I’d again asked him to call me earlier in the day, and he told me plainly,
“This is how it works.”) We’ve had one phone call since then, maybe
a minute long. I’ve sent one short email in response to his “moving dilemma.”
That’s been all, till today, when I sent him off that second short, curt email.
So, I brought back up the draft, the one where I tell him
that my asking to speak to him earlier in the day is not about the time we speak, but rather, I’m asking that we speak at a
time when we can have more quality conversations, ones that don’t have to be cut
short, because he’s calling me a few minutes before he has to leave to eat dinner, or after dark, when
I get the most tired and can’t talk.
The draft says that I want to have more of a relationship
with him, if he wants it. If he’s available for it, “I look forward to the
opportunity to enhance our relationship.”
I deleted the several and many paragraphs I’d added today
which told him how unacceptable it was that his moving is a priority over my
having cancer. That he can’t talk any other time during the day. Unacceptable that his time table is a priority
when his daughter is facing a life-threatening illness. I took out all the
parts that said how hurt I was. That I felt like I wasn’t a priority. Because I will not be that vulnerable to him.
I am so terribly hurt. I am. So, I’m giving him the chance to
make it up to me.
Advice from friends had been to let it go, to accept what is.
To not go to the empty well again. But I’m not going to the empty well with
this one, I think. I’m saying, Look dude, this is what I want. You can show up,
or you can’t. I feel like I am giving an ultimatum, and maybe if it doesn’t work, I can or will wash my hands forever, or for a while at least. Tell him to stop giving me his pittance. To stop contacting me right now. To stop telling me about his vile, vomituous new wonderful life. Because, do you know how
painful it is to have a father who can’t — No, Won’t — make time for his ill child?
?
It might backfire. I might be setting myself up for
disappointment again. But, I’m taking what Dr. Bernie says to heart, what my therapist
and my chiro are telling me – Anger is burning me up inside, and I can’t have
that anymore. “Accepting” it, isn’t working right now. Being in contact with him like this isn’t working right now.
Better that I should tell him? Better that I should give him the chance? Better that I should be the “good daughter” one more goddamned time??….
Maybe it’s not the “right
thing,” the “enlightened” thing. Maybe it’s not the “recovered” goddamned thing. But right now I don’t care. Choosing to swallow my anger isn’t working.
The most common character, says Bernie, of a cancer
patient is the compulsive giver. The person who puts others’ needs before their
own.
Fuck That. I’m not going to be part of the statistic. !!!!
I’m not going to be part of the statistic.