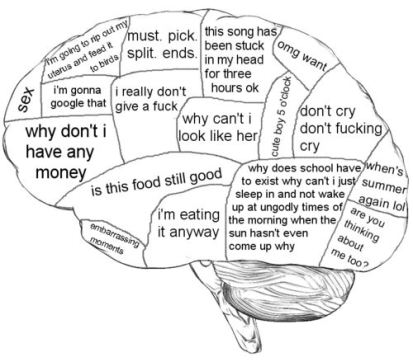 “Don’t you understand how Cho’s feeling at the moment?” [Hermione] asked.
“No,” said Ron and Harry together.
Hermione sighed and laid down her quill.
“Well, obviously, she’s feeling very sad, because of Cedric dying.  Then I expect she’s feeling confused because she liked Cedric and now she likes Harry, and she can’t work out who she likes best.  Then she’ll be feeling guilty, thinking it’s an insult to Cedric’s memory to be kissing Harry at all, and she’ll be worrying about what everyone else might say about her if she starts going out with Harry.  And she probably can’t work out what her feelings toward Harry are anyway, because he was the one who was with Cedric when Cedric died, so that’s all very mixed up and painful.  Oh, and she’s afraid she’s going to be thrown off the Ravenclaw Quidditch team because she’s been flying so badly.”
A slightly stunned silence greeted the end of this speech, then Ron said, “One person can’t feel all that at once, they’d explode.”
“Just because you’ve got the emotional range of a teaspoon doesn’t mean we all have,” said Hermione nastily, picking up her her quill again.

― J.K. Rowling, Harry Potter and the Order of the Phoenix

Among the feelings I’m experiencing today are:

Clearly, I have no problem holding multiple emotions at once!  But before I languish in overwhelm or analyzation, I’m going to get up and cook those 15 pounds of vegetables I purchased yesterday.  Knowing my emotions is awareness; analyzing them is useless.

One thought on “More than a teaspoon”