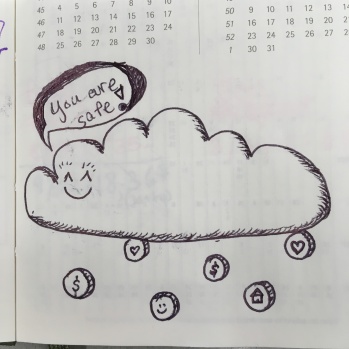 There’s a spiritual practice called “Feed Your Demons” that I was introduced to about a year ago.  In this process, you actively amplify some one of the trillion negative voices in your head and give it a form.  You invite it to come before you—and it’s safe to do so because of all the other work you’ve done—and you start to see if it has a face or eyes at least.

Once here, you ask a series of questions:

How do I feel about this entity/voice?  What do I experience in my own body when it’s before me?  How do I react when listening to all the crap that it’s spewing?

Then, you go inside the demon.  You probe in to see yourself through its eyes: How does it see me?  What is its opinion of me, really?  What is it scared of?

Coming back into yourself, you imagine offering the demon an unending supply of whatever it is that it’s needing.  What is it actually trying to get or feel?  I have imagined this, in different meditations, as the demon bathing in a golden liquid, or being rained upon from a redwood’s soaked needles, or, once, like a lab rat licking from an inverted water bottle.

You imagine that this demon, this voice, drinks of that worthiness, of that golden satiety until it is full, until it is wholly full of whatever comfort it needed.  And you observe what has happened.

That rat, having drunk its fill of love/gold/worthiness, transformed into a very young girl who just loved to hold your hand and repeat with that certainty and experimentation of language that a 2 or 3-year old has: “I’m important!”  To which, the older me who was with her would reply, “Yes.  Yes, you are.”  And just a few steps later, excited at her burgeoning discovery and with the facility for repetition only a child retains, she’d repeat with sunny authority: “I’m important.”  Yes, love.  Yes, you are.

In some cases, these demons are just perverted assets or positive beliefs that have gotten so twisted in their attempts at protecting you that they just require untwisting and then they get to hang with you for always, like the little girl.  Sometimes, though, the voice really doesn’t belong to you.  It is composed of something corroded and you must invite it to leave in whatever way makes sense — which it has to then do.  It is no longer allowed to stay in your consciousness if you have asked it to leave.

Yesterday, I invited in my Judgment — the character defect/defense/outmoded protection element (whatever term makes sense to you) — that I’m presently working to loosen.

Partly as a function of a Facebook advertisement repeatedly showing this Magritte painting of a man in a suit and bowler hat with a floating green apple obscuring his face, and partly as a result of my having read Lev Grossman’s Magician series this summer where the main evil is a man whose face is obscured for much of the book by a floating branch, my Judgment came to meet me in the form of that man in a suit.

But its face was a scribbled, swirl of black lines, crackling and spitting like an electrical storm, and its eyes were molten red.  The thing scared the hell out of me.

The words it produced went along the same lines that perhaps some of yours do, vicious and biting and cold, harsh words that erode your very sense of self, of purpose, of ease in the world.  Judgment is a blaring asshole.

To forward to the end of my “Feed Your Demons” process, here’s what happened for this man in a suit: I imagined he was fed that gold liquid from a large wine skein, an unlimited supply of whatever it was that demon was trying to get from me by keeping me scared and small and distracted.  It drank and drank, its stomach started to swell, I thought it would become bloated and kind of fall over.

It filled moreso and began to blow up like Violet Beauregarde, rounding and inflating.  The man in the suit started to pale as he drank, the color washing out of him, bleaching.  The man became something else, it was turning into …

Once he’d begun to drink, the words from the golden liquid, from his nourishment, became audible: You are safe.  *glug glug glug*  You are safe.

Judgment, loosed of all its vitriol, detoxed to reveal a sweet, enveloping little cloud floating just beside me, chiming and repeating:  You are safe!

Judgment… as a mechanism for Safety?

If I judge you then I don’t feel vulnerable or uncertain.  If I am different than you, I don’t have to exist within the discomfort of your oh-so-humanness nor do I have to admit that maybe I’m human, too.  If I savagely eviscerate myself and judge my efforts, I will recoil, crumple, and never attempt things unfamiliar or growth-oriented.

Well, yeah.  It sorta does make sense, albeit a radically circuitous kind of sense.

To think: behind all that blackness can now be a white, fluffy cloud bumping along beside me?  Every time that I think a worried thought, that I question a novel move, that I wonder if I said/did/am the right thing, this cherub of Divine Love is now here to chirp at and remind me, “You are safe”?

Damn, those meditations are good.

Artist, Woman, Human with a desire to explore, create, and incite a revolution of the soul (hint: not only my own). View all posts by Molly Daniels