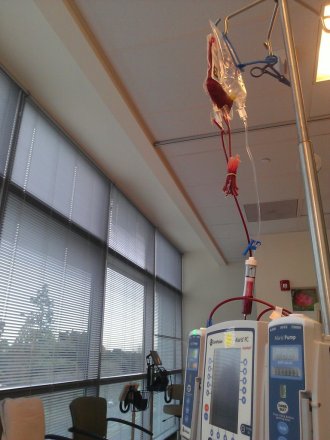 This is the question I posited to my students as we began our novel this week.  Their responses reflected the duality of the answer.  A person may be inherently brave, but unless they are given opportunities to produce that quality, they may never be so.

As the dawn arises on Yom Kippur, 2018/5779, I note that it is 6 years since the morning I was diagnosed with Leukemia (AML, for the curious).

I use the Jewish calendar to mark my date, as Yom Kippur is a whopper of a day to be diagnosed.  According to tradition, the evening of Yom Kippur marks the closing of “The Book of Life,” sealing us—or not—for the coming year.

Not overly cataclysmic, is it?

On this day, 6 years ago, the dawn rose on me slightly wasted away.  I hadn’t been able to swallow much food; I’d had strep throat for almost a month.  My tonsils were white with infection and swallowing unleashed a spire of pain.  Down at the other end of things, my digestion held nothing in and Ganges’ water poured out.

I felt frail, had rippling spots in my vision, and for several days now, had been suffering night sweats and chills, my brain beginning to go fuzzy, thoughts arriving with little to adhere to.

Clearly, I was sick.

But I’d also just started a new job and I was sure my health insurance from the graduate school I’d left in May had lapsed, so I hadn’t seen a “real” doctor.  A friend did take me 2 weeks earlier to a hacienda clinic somewhere in deep Oakland, where the doctor — who was friendly and competent — took a throat sample, confirmed strep throat, and prescribed antibiotics.

On the morning of Yom Kippur 2012/5773, I called my friend to drive me to the hospital.  When I opened my apartment door she said, “You look like sh*t.”  G-d loves true friends;)

I’d finally accepted that eating yogurt, drinking chicken soup, and swallowing herbal pills were not going to cut it, just as the Western meds had not.

On the drive to the hospital, my friend pulled over so I could puke out the open door.

I waited on a stretcher in the ER.  It was a few hours and not much else later that the staff came back to say, “You do have health insurance.  You are covered by Kaiser hospital—go there.”  And they loaded me onto an ambulance to travel across town.

(I would later discover that my grad school was a little procrastinate-y about canceling graduates’ health coverage, so mine was set to expire after September.  It was Wednesday, September 26.)

On a cot in a private ER room in the bowels of Kaiser hospital, I lay for several hours.  The nurses had put in an IV of saline and I was feeling remarkably better.  Maybe it was just extreme dehydration?

Close upon midnight, a cute doctor walked into my small ER room.  I can’t recall if I was laying down or had sat up, but he rolled the tan pleather-covered stool over to my cot and sat himself down beside me.

“You do have strep throat.  You also have Leukemia.”

In the next handful of minutes, I asked him for something to write on.  Somehow there wasn’t anything, so we tore apart a tissue box so I could write down what he was saying.  My brain, fuzzy before, had become swaddled in cotton.

What I wrote on that cardboard scrap were a bunch of numbers.  They were about my blood.  Those numbers told the doctor that 48 percent of my blood was cancer.  Half of my body was invasion.

Deep into the night, the sun having set on Yom Kippur sealing everyone into — or out of — The Book of Life, this man told me I now faced death.

He told me a few more things, like I wouldn’t be going home that night.  Like the next day, Thursday, they’d take me to surgery to insert a “port” in my chest.  Like the kind of chemo they needed to give me couldn’t be fed through my paltry extremity veins; it had to be dumped directly into my heart.

On Friday, the radioactive liquid that nurses and doctors would wear thick rubber gloves and a yellow haz-mat suit to deliver, would begin pouring into me.

Later, I would mis-hear one of my oncologists tell me my cancer was one that had a 20% mortality rate.

I would, even later, discover that he’d actually said 20% survival rate.

That mis-hearing meant that on the phone with my best friend back East, I would get to tell her that this was a good cancer, an easy cancer, a no-worries Hakuna Matata cancer.

And that would help to save me.

I’d spend 10 of the next 24 weeks in a hospital room.  Because of the type of cancer and treatment I’d receive, I needed to be hospitalized for a full week for each infusion of chemo… that is, after the first round of chemo when I’d need to stay hospitalized for an entire month.

I … “celebrated” (not at all the right word, but I leave it for irony) my 31st birthday in a hospital gown.

I began to figure it out, if there was such a thing.

First off, I began again to write my daily blog.  I’d called one of my best SF friends and asked her to write on Facebook what had happened (Leukemia) and where I was (Oakland), and for people to come visit me.

I was never, ever going to go through this madness alone.

My nuclear family live/d on the Eastern seaboard, and my created family lived in The Bay.  They better come visit me, yo!

The nurses continued to remark that they’d never seen someone with so many visitors.  There was not one, never, not even one day that I spent without a visitor to my hospital room.

There were friends I hadn’t seen in several years since moving from San Francisco to Oakland.  There were folks who didn’t know me directly, but had heard of my call for visitors and came, in droves, to sit with me, laugh with me, read to me, cry with me.

That first week, a petite woman I knew only by sight came tottering into my room laden with an enormous, fuzzy blanket because I’d told her friend that the blankets “on the inside” were threadbare and depressing.  I’d lose 25 pounds that first month.  I was cold.

Slowly, the “figuring it out” thing looked like: visitors (but also a sign on the door that read, “Do not disturb, Meditating.”), blogging, a subscription to Netflix for the first time, my first smart phone so I could check the Kaiser app, a clock radio tuned to the 24-hour Christmas music station as hospitals are a cheerless and musicless sterility, markers and notepads, get-well cards from the whole country taped over the staid hospital paintings, a garland of dried flowers as live ones weren’t permitted because of my vulnerability to disease they may carry, earplugs, an eye mask, so many warm hats, normal street clothes instead of a hospital gown so long as they could access the port in my chest (One day, a doctor walked in as I was puttering about the room and asked me where the patient was!).

When I felt able, I walked around the glassed-in circumference of the floor trailing my IV stand I’d named “Fred” because he was my dance partner, towels and soap from home so I didn’t feel like an inmate (I still can’t abide the scent of Kaiser hand-soap and so hold my breath).  When chemo brain wasn’t on me (think “mommy brain”: a vague dissolution of thoughts and inability to focus your vision on a page) I had books to read, comedy dvds from one of my first San Francisco friends, and a yoga mat so I could stretch my bed-ridden body on the cold, germy, linoleum floor.

Travel mugs and tea bags, bottles of fizzy water as flat water tasted like metal, crates of Orgain protein drink as the Ensure they supplied went straight through me like the vegetable oil it was.

During this time, visitors would tell me how brave I was, how courageous.  That they’d read my blog and couldn’t believe how strong I was being.  How I was, with such certainty and determination, traveling through a gauntlet that no human being, let alone a thirty-year old woman, should be required to navigate.

At the time, this did not feel like bravery.  Bravery feels like a decision, like something you’ve chosen to do.  This, the manner with which I was going through cancer, did not feel like a choice — it felt natural, like breathing, like Of Course I would reach out, accept help, eat chocolate-chip banana bread and wear jeans.  (tearing up over here)

OF F*CKING COURSE I would dispel that darkness back from whence it came.

Well.  I’ll tell you.  I was not a woman who would have predicted she’d perform with grace under pressure.  But I am someone not surprised by it.

The forge within which this graced power was found was both existent and new.  The iron and lace with which I juggled daily and hourly trauma was both inherent and gifted.

The ocean of love that I sailed atop was both revealed and materialized.

What makes a man?  Is it the resident components of one’s constitution, or a sum that is worlds greater than its parts?

What does The Book of Life record: our past or our future self?

I must trumpet the acres of new growth and discovery that have germinated from this hardship.  But, too, I must acknowledge the seeds, roots, and Redwoods of faith and fortitude that were already there.